Situated between a vast forest of several thousand acres and the small village of Weiterswiller (50 km north of Strasbourg), Ryumon Ji Monastery consists of several buildings at the centre of which lies the Buddhist chapel. There is also a vegetable garden, a flower garden, a garden of medicinal herbs, and a rock garden.

Ryumon Ji Monastery was founded in 1999 by Master Reigen Wang-Genh by virtue of much support and donations made by several practitioners in Alsace and southern Germany. Since that time, nuns, monks, and lay people have visited and stayed at Ryumon Ji to follow a monastic life in accord with the regulations of soto zen.

The Monastery is managed by Master Reigen Wang-Genh who has been practicing zen Buddhism since 1973, when he was a diciple of Master Taisen Deshimaru.

Ryumon Ji is officially recognized by the highest authorities in the school of Soto Zen as a centre of Buddhist teaching and practice.

Important : The temple welcomes an equal number of French and German participants. Both language are regularly spoken, and the teachings are translated.

If you do not understand both languages, we will do our best to make the teachings available to you in English. We welcome you to join us.

Educational film and documentary shot at the Ryumon Ji Zen temple in Weiterswiller in Alsace.
Explanation of the posture and life in the temple with Zen Buddhist monks and nuns. At the heart of Zen practice.

Learn to meditate - without accommodation

Upon request, a discovery session of Zen meditation- zazen - can be organized at the monastery. It is led by an experienced monk or nun. These sessions for beginners generally take place on Mondays or Fridays at 5:45 pm.

You can practice on a meditation cushion, a small bench or a chair. Sesshin are open to everyone without any particular physical condition.
Information : info@meditation-zen.org or 03 88 89 26 02 - in the morning

Schedules of zazen practices - Zen meditation - at the monastery
Look out! These schedules change during the periods of retreat - sesshin, inquire by mail before coming. 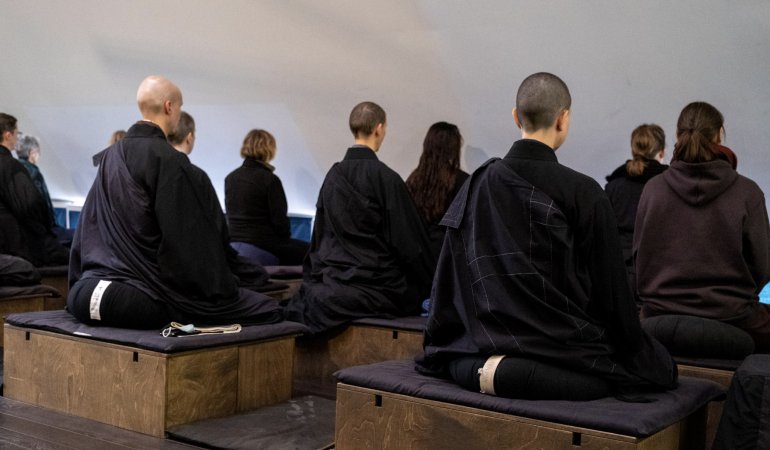 The monastery and the House of Dana can be visited every day from 9:00 to 12:00 and 14:00 to 18:00. The Buddhist chapel and gardens are freely accessible. Information boards and leaflets are available.
Free entrance, offering box.

The Buddhist chapel is furnished with meditation cushions and chairs to offer the visitor a moment of peace. Anyone wishing to settle down to meditate, pray or simply rest is welcome.

The monks and nuns of the temple will be happy to show you around the monastery as a whole and to introduce you to the traditional practice of Zen Buddhism. A workshop to discover Zen meditation can also be organized.

By car - arriving from Strasbourg

When you enter Weiterswiller follow the main street. After the restaurant "the three roses" take the first street on the left (rose street). The temple is 500 m further on your left (the last house).

All the way to Ingwiller station. Please coordinate your arrival with the secretary's office.

IMPORTANT : All registrations for the retreats are made by email. You can reach us by phone to ask for information, in the morning (except Monday). We are a zen monastery, the response time to emails varies between 1 hour and 48 hours: thank you for your patience.