Buddhism arrived in China, a land already culturally rich, at the start of our present era : two schools of great thinking had flourished there for several centuries : Taoism and Confucianism. During its time in China, the expression of the message of the Buddha was impregnated with the culture of this great country, whilst at the same time keeping its authenticity.
To understand present evolutions of Soto Zen, it’s interesting to dive back into the source, particularly by studying one of the richest periods of Buddhism, that of the diffusion of Chan in China, from the 6th to the 13th century.

These seven centuries can be divided into three large periods.

From the  6th to the 7th. Century, Chan developed in China, due to the arrival of the Indian monk, Bodhidharma. This era, where legend and history mix, is that of the founding patriarchs: Bodhidharma, Eka, Sosan, Doshin, and Konin and at the peak, the sixth patriarch, Daikan Eno. Eno had two principal successors : Nangaku Ejo and Seigen Gyoshi, who are at the origin of all the great lineages that followed.

From the 7th to the 10th century many lineages proliferated in the transmission of Chan. Many of them faded out, but others were the origin of five great schools that appeared afterwards.
It was at the time of Hyakujo (9th century) that the first Chan monasteries appeard, with their own rules. Doshin in his time had already laid the foundations of a first regulation : Hyakujo pursued this work and instituted the famous rule “A day without work is a day without eating”. This was the start of samu.

This era was that of the first foundational texts of Soto Zen, such as Sandokai and Hokyo Zanmai. An extraordinary creativity manifested and reputed masters such as Nangaku, Sekito, Tokusan, Baso, Yakusan, Tozan, Hyakujo, Seppo, Rinzai, Nansen and Joshu, who belonged to different lineages, each developed an original teaching with their own formulation. 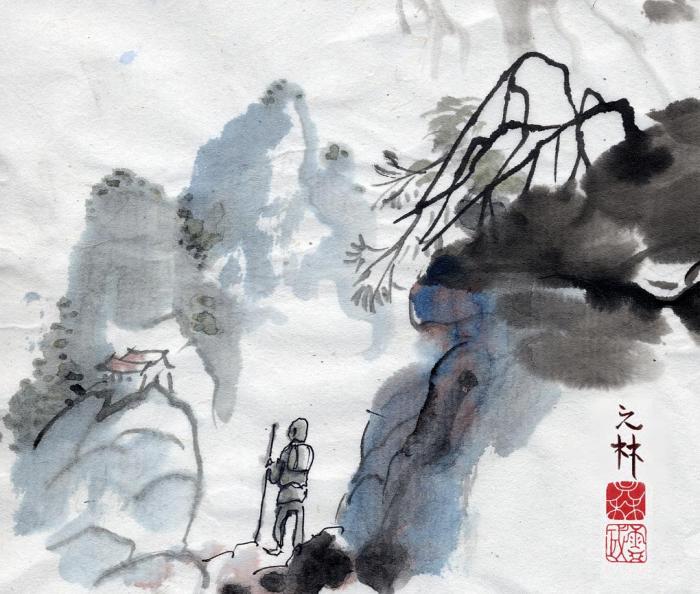 For example, Tozan and Sozan, considered the founders of the Soto school, created a great number of famous formulas, such as the five levels (go i) the three paths, the three falls, the three escapes etc. All these formulas and different expressions should allow disciples to avoid the traps of intellectual understanding, taking them out of the rut of  their previous understanding and awakening them to  the reality of the Way of Buddha.
Some of these masters were at the head of large communities, sometimes comprised of more than a thousand monks, and had a large number of dharma successors. In this way, Seppo transmitted to fifty of his disciples.

This period was called the Golden Age of Chan. It was at this time that the five schools or houses appeared. Hogen, Ummon, Igyo, Soto and Rinzai. The stories and anecdotes concerning the patriarchs of these schools have become reference points for students and are at the origin of what we would call koans or public cases.

It is in this context, which was particularly rich and prolific, that the third period of the expansion of Chan opened up (the Song dynasty.) It revealed a more and more refined literature and the schools established their own specific traits with such rigidity, that the remedies themselves were causing sickness. Thus, in the 12th centruy that the famous (true/false) polemic arose between Wanshi Sogaku of the Soto lineage and Daie Soko who edited the Hekiganroku, the gathering and commentary on the koans of the Rinzai school.
Wanshi Sogaku (1091-1157) is considered the one who re-animated the rather moribund Soto lineage in bringing back the true meaning of the practice of Shikantaza. Zazen had become little by little a quiet practice completely denuded of the mind of awakening, where all the monks slept more than they meditated.

Thus, by reason of being absorbed in a state close to mental vacuity, the monks were no longer able to respond to the needs of everyday life, notably their relationship with the laity.
It was to respond to critics and to the disapproval of many master and notably of Dai’esoko, that Wanshi wrote his most profound texts, such as the Mokushoka, where the practice of shikantaza rediscovered its whole dimension and mystery.

It was pure shikantaza that Tendo Nyojo would transmit to the young Dogen, who had come from Japan in search of authentic dharma.